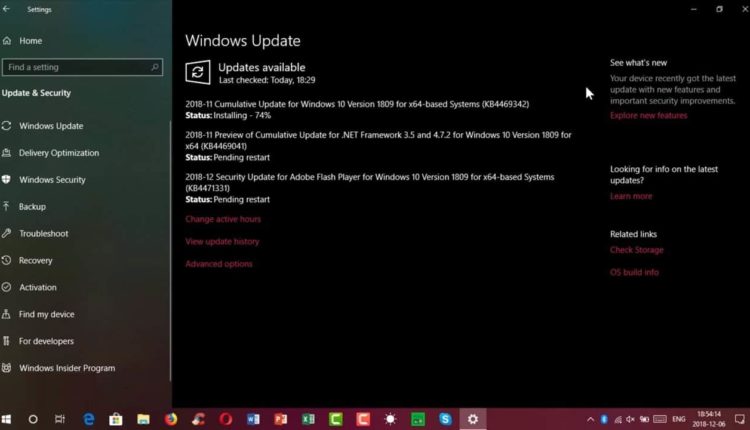 After a longer test phase with Windows insiders, Microsoft has finally released Cumulative update KB4469342 for everyone running Windows 10 version 1809 from Windows Update and the Microsoft Update Catalog. According to the Microsoft support page, Installing cumulative update KB4469342, Bumps OS to Windows 10 build 17763.168 and resolve several known bugs that include mapped network drives to disconnect at startup, issues trying to set an app as a default, problems with adjusting brightness, Bluetooth, black screen, Microsoft Edge and more.

There are still some unresolved issues in this update, including a bug that breaks the Seek Bar in Windows Media Player when playing certain files and Microsoft’s Edge browser may also crash on machines with a recent Nvidia driver update. Note: Nvidia has released an updated driver to address this issue. Please follow the instructions found in NVidia’s support article.

KB4469342 is the fourth cumulative update for the Windows 10 version 1809 That automatically downloads and installs via Windows update. Also, users force from Settings -> Update & Security -> check for update to manually install the cumulative update KB4469342.

Also the KB4469342 (OS build 17763.168) offline package is available for download on the Microsoft catalog blog, you can get it from the link below.

Solved: Taskbar not working after…

DNS server is not responding on windows…

How To Setup static IP address on…