The company lists Companion device dynamic lock APIS, replaced by Dynamic Lock, and OneSync service, taken over by Outlook app syncing, as no longer in development.

Microsoft plans to replace one of the most useful Snipping Tool with the upcoming Snip & Sketch application that it will introduce in Windows 10 version 1809.

Deprecated features that are no longer in active development

Starting with the October 2018 Update, Windows 10 is retiring support of the Disk Cleanup legacy tool in favor of the Storage sense, which includes all the equivalent features and more.

The old snipping tool for taking screenshots will remain available but Microsoft has stopped developing it. Which is getting replaced with Its new tool for screenshots is called Snip & Sketch, Microsoft explained 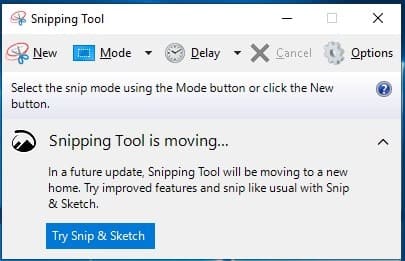 “We’re no longer developing the Snipping Tool as a separate app but are instead consolidating its functionality into Snip & Sketch.”

“You can launch Snip & Sketch directly and start a snip from there, or just press WIN + Shift + S. Snip & Sketch can also be launched from the ‘Screen snip’ button in the Action Center,”

Microsoft also stopped working on the one sync service for mail, calendar, and people apps.

The phone companion app, which helped share content between mobile and PC will be removed, Where Microsoft recommends using the Phone page in the settings app to sync
a mobile with the PC instead.

The hologram app will be replaced by the mixed reality viewer.

The companion device APIs for unlocking a PC via a proximate wearable using Bluetooth will not be further developed either, because Microsoft’s partners didn’t adopt the method.

Microsoft is no longer publishing new updates to the WEDU server. Instead, you may secure any new updates from the Microsoft Update Catalog.

You can check out Microsoft’s listing of removed and deprecated features on the company’s Docs website.

The Windows 10 October 2018 Update is in its final stretch of development, Once it ships out to the public, the above features will be removed or replaced as described.

3 ways to Remove Write Protection From…

How to upgrade to Windows 10 version…