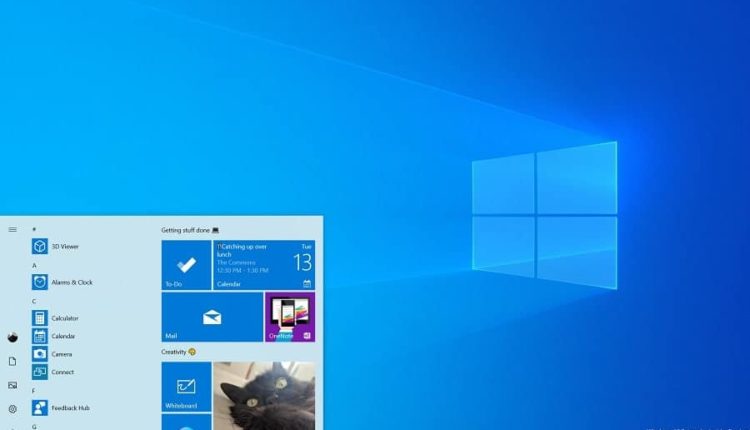 Microsoft introduced a new light theme on Windows 10 19H1 Preview build 18282 that changes many elements of the OS UI, including the taskbar, Start menu, Action Center, touch keyboard, and so on. (Not all elements are currently Light-friendly though). The new color scheme is available in Settings > Personalization > Colors and selecting the  Light option under the “Choose your color” drop-down menu.

Also as part of this new light theme, Microsoft is adding a new default wallpaper highlighting Windows Light which you can use Settings > Personalization > Theme and selecting the Windows Light theme.

The latest Windows 10 Build 18282 also brings a modern printing experience with light theme support, new icons, and a refined interface that displays the full name of the printer without cutting it off in case it includes several words.

Snip & Sketch seems like Microsoft reinventing the wheel once again, doing away with the perfectly functional Snipping Tool to add another utility that does largely the same thing, albeit with inking capabilities. Microsoft team has been busy bringing Skip & Sketch back up to par with the Snipping Tool—it recently added a delay feature, and this new build now allows you to select a window automatically.

Start your snip via your preferred entry point (WIN + Shift + S, Print Screen (if you’ve enabled it), directly from within Snip & Sketch, etc.), and select the window snip option at the top, and snip away! That selection will be remembered the next time you start a snip.

Windows Update is getting some improvements too, and beginning with this build, updates can be paused right from the main UI. Also with the latest Windows 10 Preview build 18282 Microsoft has debuted “Intelligent Active Hours”, which is designed to automatically adjust Active Hours based on your behavior. To turn the setting, go to Settings > Update and Security > Windows Update > Change active hours.

Microsoft also modifying the display brightness behavior to prevent the display from becoming brighter when moving from a battery charger to battery power Also there are several Narrator improvements, like a more consistent reading experience, read-by-sentence commands on a braille display, and further phonetic reading optimizations.

There are obviously several other improvements that include An issue causing File Explorer to freeze when interacting with video, Certain x86 apps, and games having blurry text rendering now fixed.

Fixed several bugs include context menu not coming up when right-clicking an open app in Task View, touch keyboard not working correctly when trying to type Chinese with the Bopomofo IME, PDC_WATCHDOG_TIMEOUT bug check / green screen on resume from hibernate, Network button on the sign-in screen not working.

Also, the latest build fixed an issue resulting in some users not being able to set Win32 program defaults for certain app and file type combinations using the Open with… command or via Settings > Apps > Default apps

When you hover over the navigation pane in Start, after a short period it will now automatically expand. This is something that a portion of Insiders have had for a little bit now, and after finding positive results we’re now rolling it out to all Insiders.

Added a shadow to Action Center, to match the shadow seen along the borders of our other taskbar flyouts.

Also, there is some know issues such as

The latest Windows 10 19H1 preview build automatically download and installed on all Devices enrolled for Fast ring and connected to the Microsoft server. Always you can force the update from  Settings > Update & security > Windows Update, and click the Check for updates button.

How To well Optimize Windows 10…